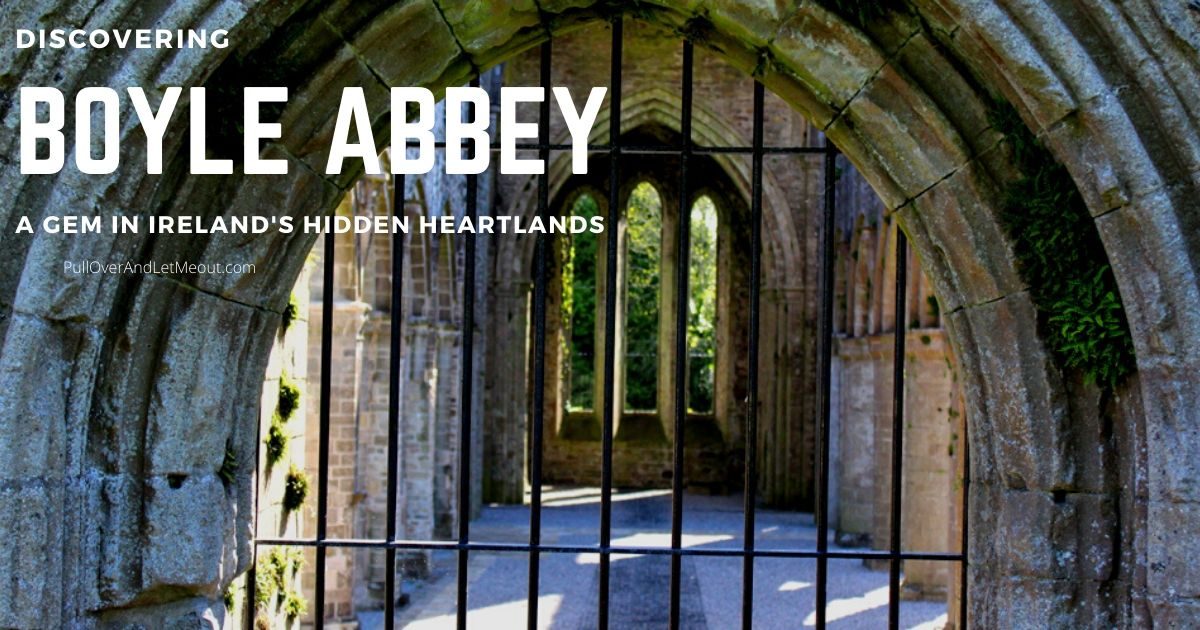 Boyle Abbey in County Roscommon, is a well-preserved Cistercian monastery founded in the 12th century. It's also an incredible architectural wonder located in Ireland's Hidden Heartlands.

Boyle Abbey in County Roscommon, Ireland, is one of my favorite historic structures in all of Ireland. Perhaps I’m slightly biased because of my love for the town, but I’m pretty sure I’d be impressed regardless. The well-preserved remains of an important Cistercian monastery built in the 12th century, Boyle Abbey is an awe-inspiring ancient structure harkening back to a time and place rich in Celtic heritage. Nestled beside the Boyle River in the town of Boyle in Ireland’s Hidden Heartlands, the abbey is a medieval wonder worth exploring. 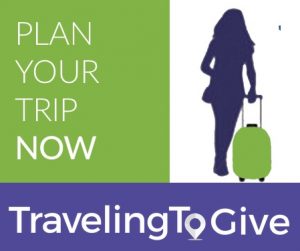 Disclosure: Many links you see on this site are affiliate links. If you click through and make a purchase I’ll get a small commission and it won’t cost you any extra. So, thanks in advance for helping me keep bringing you the content you enjoy!

Originally from Normandy in France, the Cistercians were invited to Ireland by Saint Malachy, and settled in County Louth. Later, the order established 34 daughter houses, one of which was settled in Boyle beside a small river flowing into Lough Key, in 1161. The land was given to the monks by Taoiseach McGreevy, a local chieftain and lord of Moylurg. Construction took about sixty years. There are tell-tale signs of the extended building period in visible variances in styles. Nonetheless, the workers persevered, and the abbey was finally consecrated in 1218 at the pinnacle of Cistercian life in Ireland.

The abbey served as a holy site for a few centuries. However, in 1584, the monastery’s last abbot was put to death by the English for refusing to repudiate his fealty to Rome and the Catholic Church. Thereupon, a few years later in about 1592, the monastery became a military barracks and was used as such for the following two hundred years, ultimately falling into a state of disrepair over time particularly after being besieged by Cromwellians, in 1645.

When I first started visiting Boyle, the abbey was maintained but not the attraction it is now.  Today, the Boyle Abbey is a national monument in the care of Ireland’s OPW (Office of Public Works). Several years ago, parts of the abbey were of questionable structural integrity and in danger of collapsing. Thus, efforts were made to reinforce weak areas and assure visitors to the abbey can safely explore the ruins. The clear glass wall encasing a stretch of archways is now in place to bolster the early work of the Cistercian monks. 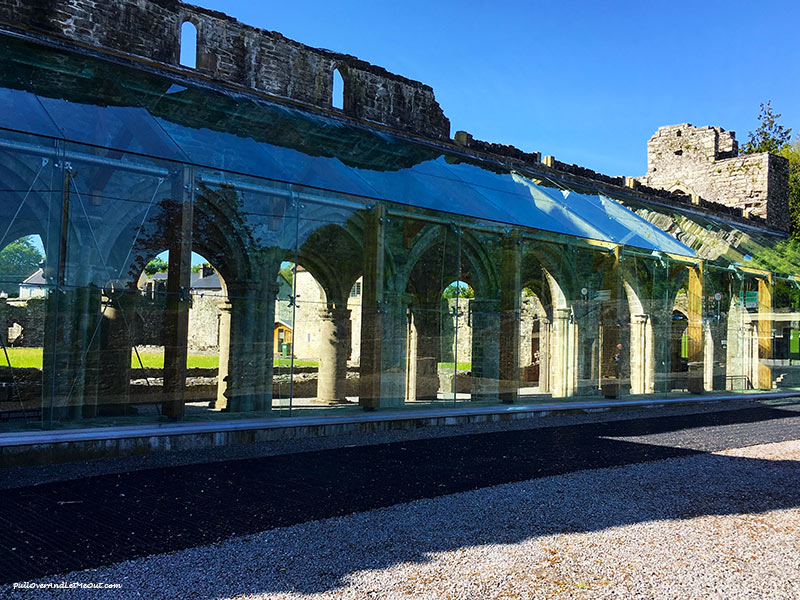 Visitors to the abbey can expect an incredible example of Ireland’s early architecture. Designed in the traditional Cistercian manner with a church on the north side of a rectangular cloister area, a kitchen and refectory on another side, a chapter house meeting area on a third side, and a store house with dormitory above on a fourth side; the outline of the ancient structure, though in ruins, still remains.

The substantial ruins, thought to be the most complete in Ireland, feature some of the most impressive early stonework carvings. I particularly enjoyed going on a bit of a scavenger hunt in search of the carvings. Studying the elaborate work done by these masters centuries ago is stirring.

The self-guided tour is an incredible opportunity to explore the abbey at your own pace while getting a glimpse into what life in a Cistercian monastery would have been like. The life of a monk was controlled and ordered consisting of dawn to dusk tasks, prayer, simplicity, and silence. Stroll the grounds, admire the architecture, and enjoy the exhibits and transport back in time at this off-the-beaten-path historic destination. Give yourself at least an hour to fully experience this grand edifice.

Last admission for the day is 45 minutes before closing

Boyle Abbey is in the town of Boyle off the N4 Dublin-Sligo Road. It’s a short walk into the town center and a brief drive to other nearby attractions such as Lough Key Forest Park, The Gaelic Chieftain, and the town of Carrick-on-Shannon. Consequently, there’s plenty to do and see within a small radius of the abbey. You can even stay in the shadow of the abbey at the Abbey House. We made Abbey House our hub for a week while touring Ireland’s Hidden Heartlands. We absolutely loved our time in the grand home outside the walls of Boyle Abbey.

Boyle Abbey is opened to visitors daily from 10 am to 6pm from late March to late September. The impressive Cistercian ruins in county Roscommon had no waiting lines or crowds. We practically had the place to ourselves. This meant it was peaceful and I was able to fully take in the magnitude of the building, the times it was built in, the history experienced within its walls, and how it’s withstood time. Something this history buff relishes. For non-history buffs it’s still an excellent piece of architecture and part of Ireland’s medieval culture not to be missed.

Click here to read about other unique Ireland destinations.

Click here to learn what to pack for your trip to Ireland. 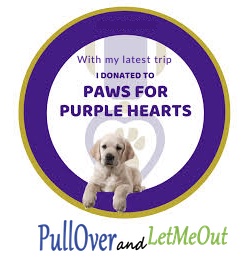 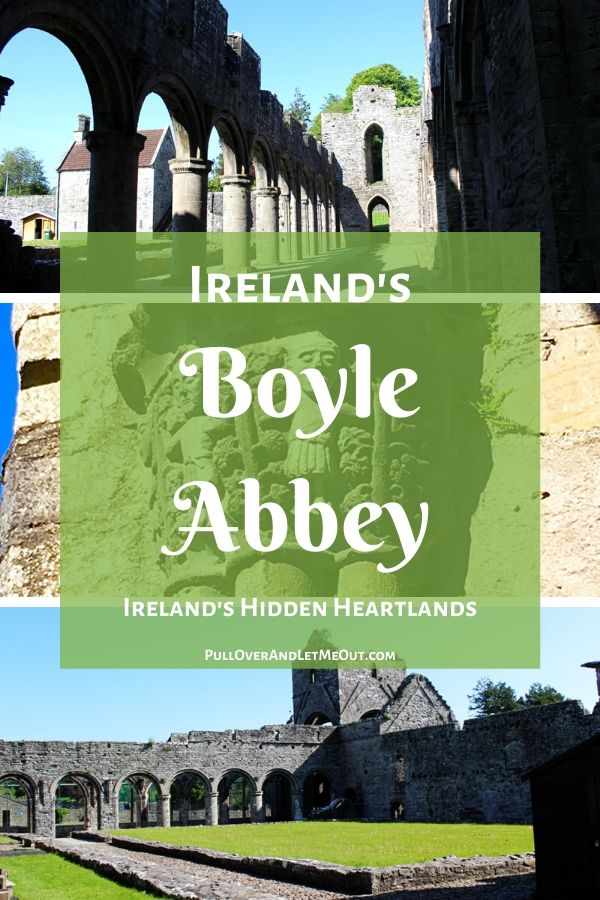 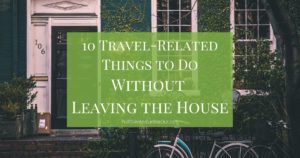 10 Travel-Related Things to Do Without Leaving The House

Whether it’s a cashflow issue, timing or a global pandemic, sometimes it’s not convenient to jet off and take that hard-earned holiday 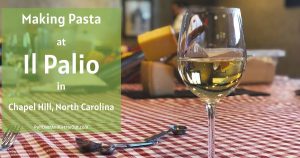 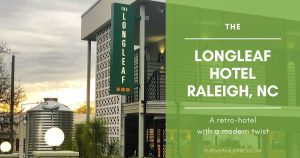 The Longleaf Hotel is a thoroughly modern yet stylishly retro accommodation in the heart of downtown Raleigh.

PrevPreviousMaking Pasta at Il Palio in Chapel Hill, North Carolina
Next10 Travel-Related Things to Do Without Leaving The HouseNext