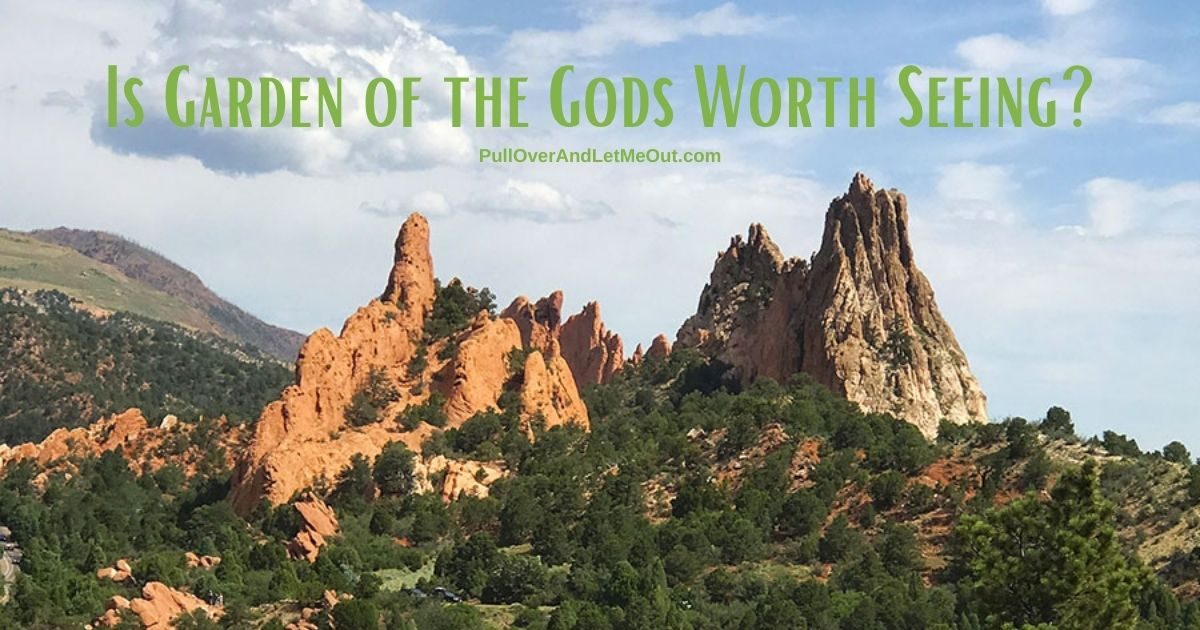 Garden of the Gods is one of the most popular tourist attractions in Colorado Springs. The prominent landmark ascending from the ground with Pike’s Peak looming high above in the background is considered a “must-see” for first-time visitors. The picturesque Garden is a rare ecological fusion where the Great Plains’ grasslands greet the American Southwest’s signature pinon-juniper woodlands and combine with the forests of the Rocky Mountains. But, is Garden of the Gods worth seeing?

What is the Garden of the Gods?

What is the Garden of the Gods?

Garden of the Gods is a conspicuous natural landmark nestled at the foot of Pikes Peak on the west side of Colorado Springs.

It’s best known for its huge red rocks that protrude straight out of the earth. Visitors come from all over the world to trek the nearly 15-miles of trails, see wildlife, and witness the formations for themselves.

Geologists believe the sedimentary beds comprised of deep-red, pink, and white sandstones, conglomerates, and limestone laid horizontally, millions of years ago. However, over time, the beds have been angled vertically and broken into “fins” by the enormous mountain building forces caused by the rising of the Rocky Mountains and Pikes Peak. Time, further geological forces, and erosion have turned the landscape into the rock formations we see and enjoy today.

How was Garden of the Gods named?

Garden of the Gods owes its name to two surveyors, M.S. Beach, and Rufus Cable.

The pair traveled from Denver City, back in 1859, to build a new townsite along the railroad to be called Colorado City. While exploring nearby areas, they came across a beautiful field of sandstone formations.

Legend has it, Beach said to his companion, Cable, that when the country grew up, this would be a “capital place for a beer garden.”

Cable, supposedly exclaimed, “Beer Garden! Why it is a fit place for the Gods to assemble. We will call it the Garden of the Gods.”

And that’s how it got its name and it’s been so-called ever since.

Garden of the Gods Visitor and Nature Center

A great place to begin a visit to the Garden of the Gods is the Visitor and Nature Center. The interactive museum brings the park to life.

Tucked into the landscape, it’s located adjacent to the red rock formation and offers spectacular panoramic views of the Garden and Pike’s Peak in the background. The center is a beehive of activity, filled with fabulous history and information. I suggest taking time to enjoy exhibits such as Colorado’s Geology, Tracking Wildlife, Ecology Matrix, The Red Rock People, Colorado’s Native Americans, and The Wall of Changing Seasons. You’ll get an informative overview of the Garden as well as details of the natural setting and inhabitants of the area.

Once you’ve enjoyed the exhibits in the museum, there’s also an expansive gift shop brimming with custom souvenirs and Colorado-made items. You’ll also find Bean Sprouts Café, a “hip and healthy café” offering an array of choices for the entire family. Fuel up and learn about the complex geology and ecology of the area before venturing across the road.

Admission into the Park and Visitor Center is FREE!

What to do at the Garden of the Gods?

What to do at the Garden of the Gods?

Be as adventurous as you wish when planning a visit to the Garden of the Gods. There’s a range of tours to choose from. Let the rubber hit the road and see the rocks on a bike, electric bike, Jeep, Segway, or Trolley tour. There’s also a free public shuttle available during the park’s most-visited months.

Get up close and summit the Garden with a rock climbing tour. Or, take to foot and run, hike, or enjoy a guided nature walk. There’s also a calendar of special events and adventure programs to choose from as well.

Prefer a self-guided tour? That’s possible too. A visit to the Garden of the Gods can be customized to suit you and your traveling party.

You can even tour the Garden on horseback. Horseback rides on designated trails can be scheduled with Academy Riding Stables.

Can I drive through the Garden of the Gods?

Can I drive through the Garden of the Gods?

You can drive through the Garden of the Gods. However, I say that with a caveat. The earlier in the day you arrive, the less traffic you’ll have to contend with. There are several spots to pull off and snap pictures too, so again, the earlier the better.

Similarly, arriving earlier makes finding parking easier. If you’re not starting a tour at the Visitor Center, there is parking closer to the Garden. Should the lot closest to the rocks be full, there’s also a larger lot at Rock Ledge Ranch Historic Site at the entrance to the park. It’s a fair walk so be prepared with comfortable shoes and water.

The park (not the Visitor Center) remains open until 11 pm during the busy season and 9 pm in the off-season if you prefer a later start to your tour. Typically the summer months are busiest but parking at Garden of the Gods is free year-round!

How long should you spend at the Garden of the Gods?

How long should you spend at the Garden of the Gods?

You can make it faster or you can make it slower, it’s entirely up to you how you wish to pace yourself when visiting the Garden of the Gods.

Nonetheless, you’ll want to allow at least 60 to 90 minutes to fully enjoy and experience both the Visitor Center and the Gardens. I recommend allowing plenty of time for walking around, appreciating nature, and observing the breath-taking scenery.

We had a blast posing for pictures and we even saw a deer who was completely unfazed by the tourists gawking at him.

Is the Garden of Gods worth seeing?

Is the Garden of the Gods worth seeing?

Garden of the Gods is one of the most spectacular landforms I’ve ever viewed. Or as my son put it best, “This is really cool. I’ve never seen mountains like this.” That’s high praise coming from a teenager.

From the red rocks to the wildlife to the magical feeling of being so tiny up against this majestic landscape, the entire experience was incredible. It’s truly a gorgeous sight to behold. Time spent here is inspiring and meaningful.

To put it succinctly, yes! A resounding yes. Garden of the Gods is worth seeing.

Watch this video for more of our visit to the Garden of the Gods!

Hey Pinners, Pin this for later! 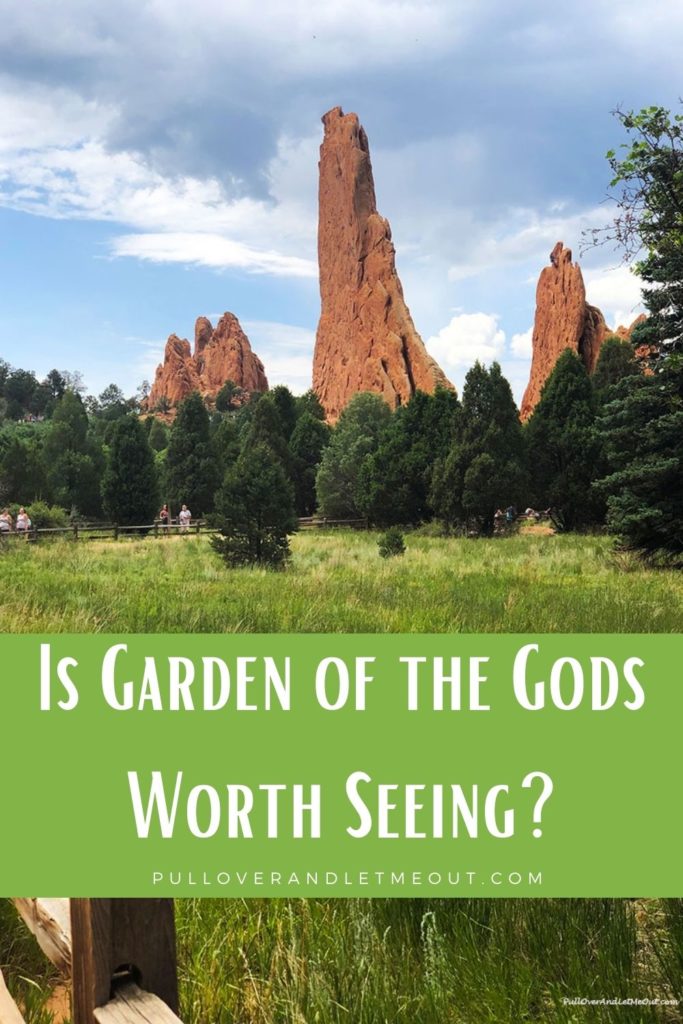 ► Plan Your Trip to Garden of the Gods Now!